Do You Know the Difference Between a Civic Association and a Homeowners Association?

Over the decades, developers have understood that property owners require protection and assurance that their neighborhoods they bought into will look as the developers originally intended. This has led to the establishment of homeowners’ associations. An HOA has the power to enforce the guidelines, rules, and regulations formulated for the neighborhood. In addition, homeowners’ associations have the legal responsibility to ensure that their community is run according to certain standards, which is why and how HOAs are able to require monthly fees for maintaining common areas, landscaping, and sometimes roads for the community. Conversely, civic associations do not possess similar powers to those of homeowners’ associations, though their objectives may be similar. While they are not legally recorded and are established voluntarily, they also aim to provide beautification or maintenance for a community. They cannot, however, enforce rules or the payment of fees if residents refuse to pay or be part of the civic association.

Size of the Association

Homeowners’ associations, including those who are managed by a Phoenix HOA management service company, are permitted to own property as an organization, also known as common area, since the law keeps a record of their operations. On the other hand, civic associations cannot own common property, meaning their ability to provide amenities beyond simple neighborhood beautification is more unlikely.

Both kinds of associations are beneficial for the maintenance of neighborhoods, but HOAs clearly have more capacity to to improve and consistently maintain their communities. With the help of our Phoenix HOA management services, HOAs can be more capable of providing high-quality services that will always make your community well kept and beautiful with financial growth. How to Handle Disputes as a Homeowners Association 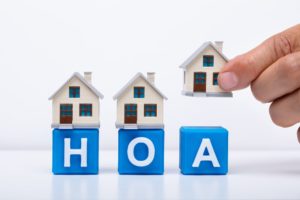 What is the HOA Board Member Election Process?